Surprise egg capsules are a fantastic base for a bulky walker type robot build. If you're lucky, the toy inside will also be a source of useful bits! The most important thing to consider when making one of these: use fine sandpaper on the plastic egg to slightly roughen up the surface. Glue will have a hard time sticking to it otherwise. The same is true for any other plastic trash used in builds, and performing this simple step will spare you a lot of frustration.

The Killer Robot is something space tomb raiders might bring with them on a mission on the Nekroplanet. This first model I built has R2D2's legs, the front of miniscule toy truck, and an assortment of other bits and bobs to greeble it. It's stable, so I didn't need to put it on a base. This robot is the start of my second gang of tomb raider Kozmonauts, which will sport black space suits with bright green accents. It will also be useful for games of Planet 28.

The Annihilator is a Grobnik armoured walker which towers over its smaller brethren. It can shoot, and it can trample the enemy into bloody pulp. This one has thrashbashed legs, and the skull face came from a dollar store toy. I used an optical mouse sensor for the 'chest piece', as it has something of a ribcage look to it. The base is sand-textured carcboard. Unfortunately the mini was too prone to tipping over without it.

Ever built an egg capsule robot yourself?

What other trashbashing uses do you see for this object?

Which suprise eggs have the most interesting/useful capsule shape?

Tell me in the comments.

Again very nice stuff here. And the good old surprise eggs are sooo usefull, I did sometime sculpt some cauldrons around them or I used them for little water tanks. Sanding them (you did say it) 2 stripes of thick paper glued around, some rivets, some wire for piping, some paint ... there you go.
I have to confess: The acquisition and the use of decorative cosmetical material will still need some effort on my side.
But hey, i did now buy some self adhesive rhinestone stickers. It is a start for me to work from this (for me hitherto unused) well of ornamentation.
Happy Easter Days for all Egg-Builders

You can use half an egg (or other hollow shape) and build the legs coming out from under the shell for that spider tank look. My son and I are working on one made from a popsicle mold.

@Frank - Happy Easter to you, too. Cauldrons and water tanks are both great uses for plastic egg shells, thank you for sharing!

@Marc - Thanks! Cool; spider tank armour is another great idea.

Superb as usual. Toy eggs are ideal for all sorts of conversion. Here’s a one-model racing pod I made. 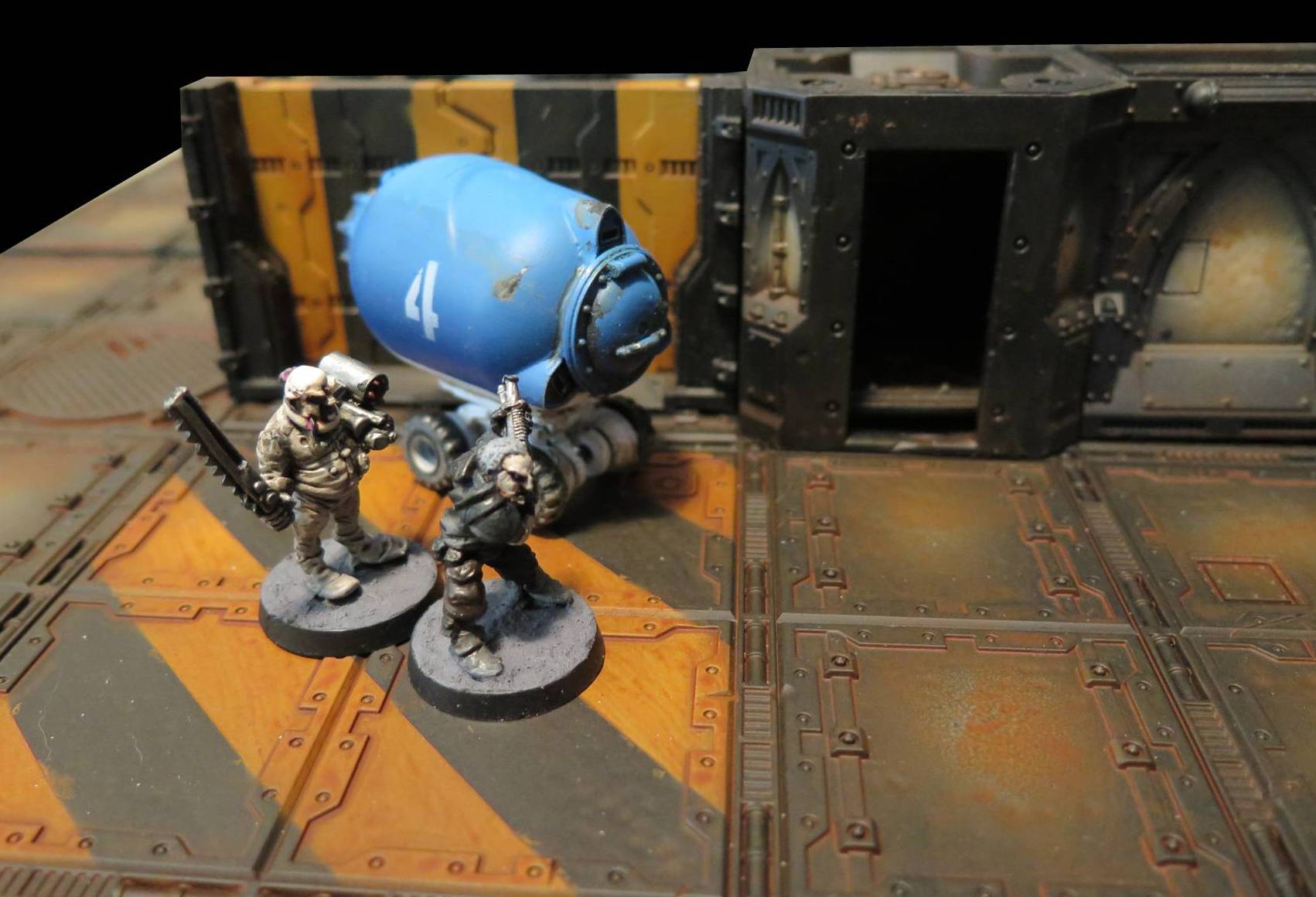 I remember trying building an ork KillaKan from egg capsule a decade ago. Didn’t work out perfectely at that time but now I know why thank to you! I guess the trick is to “break” all those flat area by adding bits and pieces so the eye don’t catch the original shape anymore.

Thank you for your amazing blog, very different from the approach of most miniature painter with a more artistic vibe. Love the Hellboy comic aspect that your models have

@Skerples - unfortunately the link you put in the comment won’t show here, but I could get to it through my admin tools. Looks great! i.imgur.com/9iFaqrf.jpg

@MajorTheRed - thank you very much! That’s right,  you want to cover the surface in a ton of little shapes, and you want it to not recognizable as what it used to be.

The contrast between the bright colors from the plastic parts and your personal dark style looks amazing. Like, it’s impossible to turn that shiny toys into a grim killer robot, but you did it.